As you will read in the summer issue of The ChAMPion, there are a number of issues that Congress and the federal agencies are focusing on that will impact our practice and our patients’ access to molecular diagnostic testing. As you make your plans for the AMP Annual Meeting & Expo, I encourage you to consider arriving in Baltimore in time to participate in AMP Advocacy Day on Tuesday, November 5, 2019.

AMP Advocacy Day will allow you to impart your experience and knowledge to those who make important decisions that influence your patients and practice. Each AMP member has a great story to tell and our representatives in Congress should hear about the vital role you play in patient care and learn about the issues that you face in your day-to-day practice. Understandably, deciding to go to Capitol Hill in Washington, D.C. to advocate for our profession can appear daunting, but AMP ensures that the experience is enriching! AMP will prepare you for a successful day by scheduling meetings with your elected representatives, providing you with talking points and background information, and arranging transportation to and from the Hill. All you will need to bring is your enthusiasm to discuss molecular pathology and some comfortable dress shoes.

If you plan to attend the AMP Annual Meeting & Expo, please register for this event when registering for the Annual Meeting. If you are unable to attend the full meeting but want to attend AMP Advocacy Day, please submit this form. Registration for Advocacy Day closes on September 5, 2019. Please note: while transportation to and from Baltimore during Advocacy Day is provided, AMP cannot reimburse Advocacy Day participants’ hotel costs or meals for the additional night(s) necessary for you to participate. As this is a high impact event with the potential to positively impact the field, AMP hopes that your department will support your participation.

Thank you in advance and I look forward to seeing you on the Hill this November! 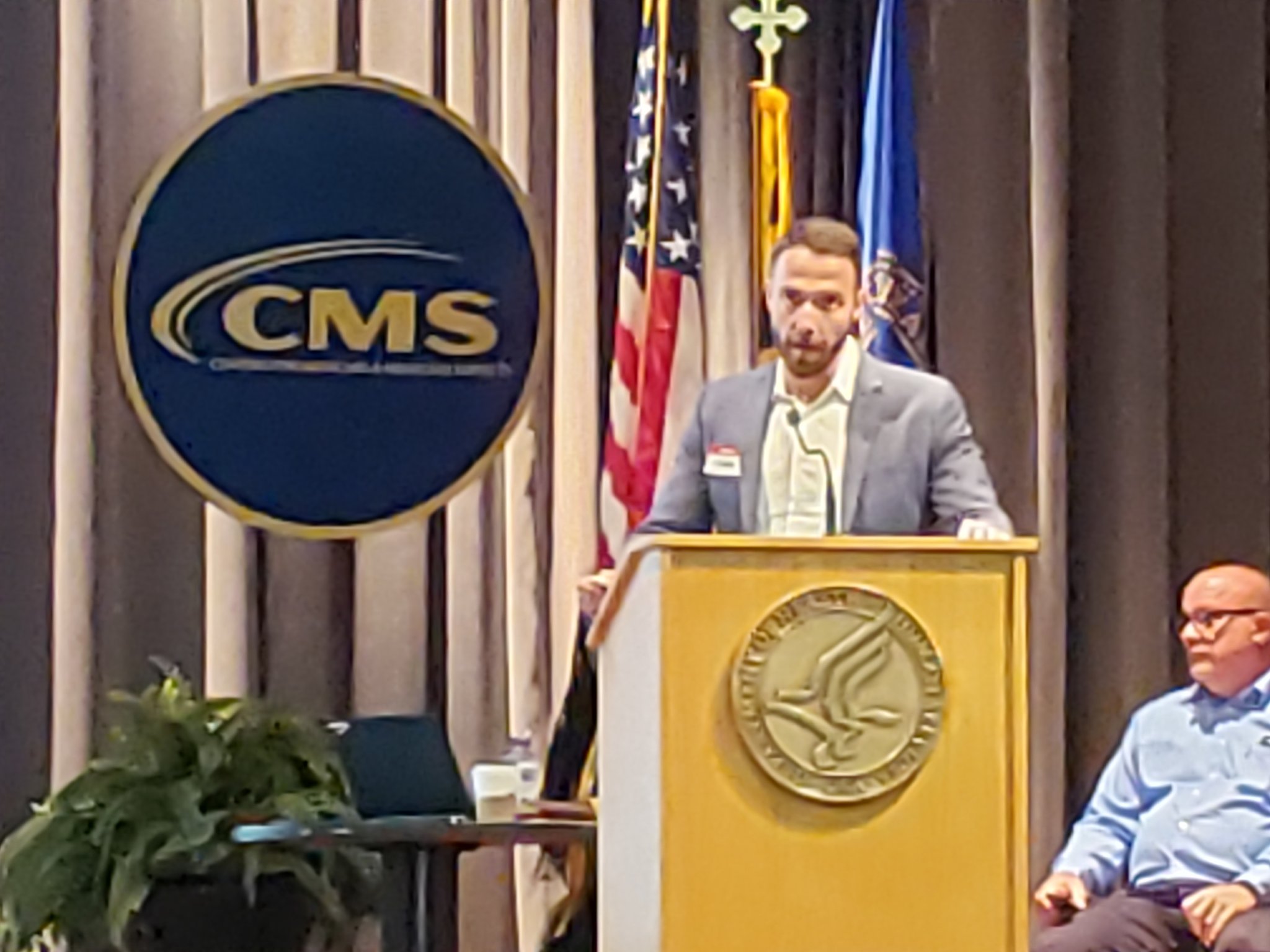 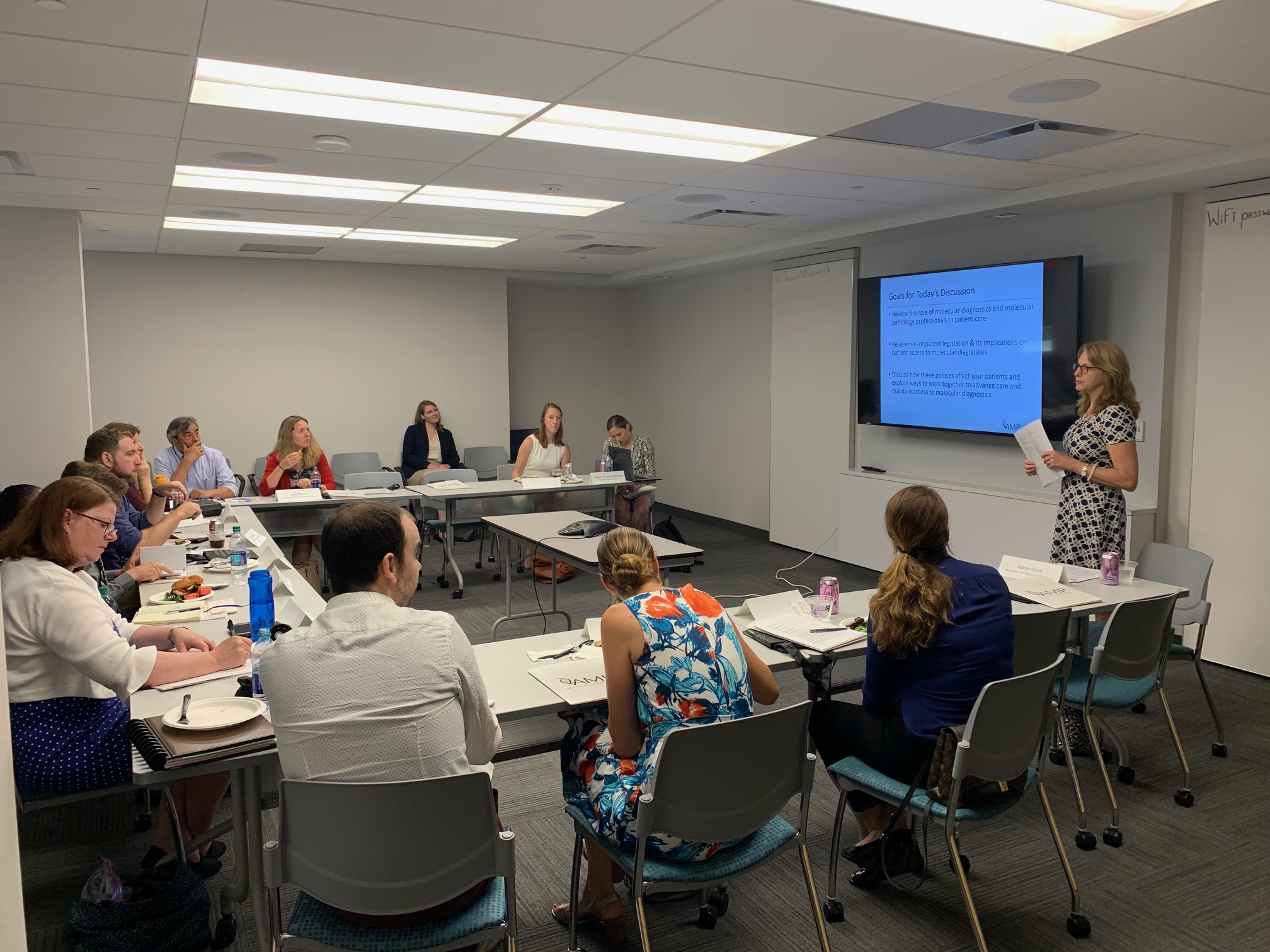 (Right) AMP President-Elect Karen Weck, MD explains how the field of molecular diagnostics was impacted by gene patents and the 2013 AMP v. Myriad court decision, while discussing newly proposed legislation to redefine what is “patentable” with patient advocates at AMP’s Lunch and Learn in June. 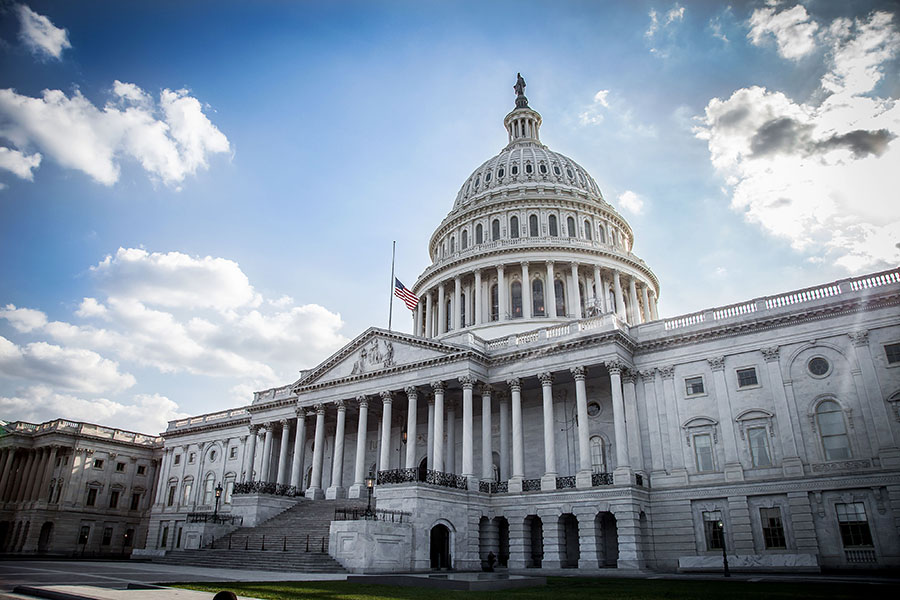 In 2013, AMP’s advocacy efforts against the ability to patent genes and other forms of naturally-occurring DNA culminated in the Supreme Court decision that determined isolated genomic DNA was not patent eligible: AMP v. Myriad Genetics. To learn more about the history of the court case and AMP’s involvement, you can watch Revisiting the AMP v. Myriad Supreme Court Ruling.

The Supreme Court ruled unanimously that human genes are not patent-eligible under Section 101 of the Patent Act, as genomic DNA is a product of nature. The Court determined that the act of simply isolating the DNA was not considered to be sufficient “human intervention” and did not satisfy Section 101. The court decision was praised by many stakeholders and helped usher in the current molecular diagnostic testing environment. Earlier this year, following a series of closed roundtable discussions, Senators Tillis (R-NC) and Coons (D-DE) and Representatives Collins (R-GA), Johnson (D-GA), and Stivers (R-OH) released draft legislation that proposed to radically alter Section 101 of the Patent Act. The released language would shift the focus of Section 101 to favor those seeking patents by allowing patents on anything found to be useful. The draft proposed to expand patent eligibility by explicitly indicating that judicially-created exceptions to patentability for “abstract ideas,” “laws of nature,” or “natural phenomena” could not be used to determine patent eligibility. Additionally, the draft proposed to abrogate all court decisions that led to or supported those exceptions, including Mayo Collaborative Servs. v. Prometheus (2012), AMP v. Myriad (2013), and Alice Corp. v. CLS Bank (2014).

While this proposal would have large reverberations across all sectors of technology, AMP is concerned such action could have serious consequences on the molecular diagnostic space if naturally-occurring DNA segments and/or gene-disease associations are allowed to be patentable again. In order to make AMP’s voice heard in this discussion, AMP spearheaded a sign-on letter with the American Civil Liberties Union (ACLU) to strongly oppose the draft legislation to rewrite Section 101 of the Patent Act and to warn about the consequences of allowing DNA and gene-disease associations to be patentable. Signers of the letter include those within the scientific, medical, and patient community, with approximately 200 organizations listed.

While the sponsors of the legislation have since stated that it was not their intent to allow patenting of “DNA within the human body,” AMP remains very concerned about the consequences of this evolving proposal, regardless of intent, and the potential effects that they could have on our field. AMP anticipates that the next draft of the legislative proposal will be released sometime in the next few months. In the meantime, AMP continues to work diligently with aligned stakeholders to lead efforts to educate others about this issue and advocate for naturally-occurring DNA segments and gene-disease associations to remain patent ineligible to Congressional offices. 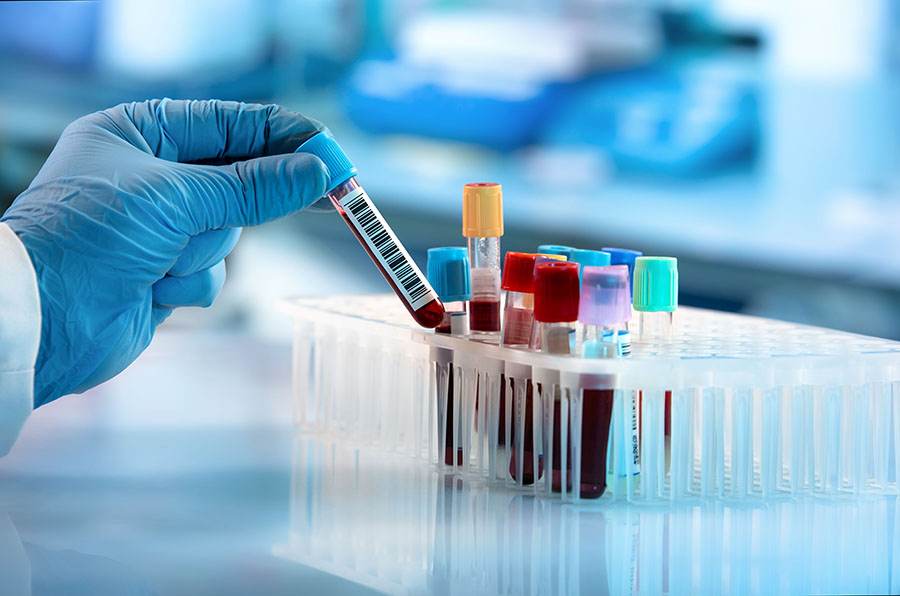 As detailed extensively in the Spring 2019 edition of The ChAMPion, the Centers for Medicare and Medicaid Services (CMS) announced their intention to reopen the National Coverage Decision (NCD) for Next-Generation Sequencing (NGS) for Medicare Beneficiaries with Advanced Cancer (referred to here as the NGS NCD) due to stakeholder concern. AMP awaited the details of the reopening, as AMP’s previous comments stressed that the NGS NCD’s inclusion of early stage NGS-based testing for germline mutations represented significant policy overreach that would have unintended consequences on patients who may have a genetic predisposition to cancer based on a family history or other relevant criteria.

At the end of April 2019, CMS opened a formal reconsideration of “the evidence available for tests of germline mutations to identify those with hereditary cancer who may benefit from targeted treatments based on the results of the test” included in the NGS NCD. As part of this process, CMS accepted stakeholder comments for 30 days after the announcement.

In the past month, AMP has met with staff for the Senate Finance Committee and the House Ways and Means Committee, the two committees with jurisdiction over Medicare, to discuss our concerns with the NGS NCD and its reconsideration process. AMP will continue to update them as this process continues. The Hill staffers understand the importance of ensuring that CMS’ policy does not hinder patient access to clinically-appropriate germline testing and they have offered their support through future communications with the agency.

In the comments for the Myeloid Malignancies LCD, both organizations recognized Palmetto’s efforts to connect the LCD to a specific list of biomarkers and requested clarity on the scientific evidence for the biomarkers included in the list. AMP and CAP also recommended the creation of a workgroup of experts to assist Palmetto in finalization of the gene/variant list. The comments also requested specific changes to the policy, such as widening coverage to include tissue samples besides bone marrow biopsies or peripheral blood samples, the allowance of more frequent repeat testing and evaluation of minimal residual disease (MRD), and the inclusion of specific CPT® and ICD-10 codes.

In the comments for the Solid Tumors LCD, AMP and CAP urged Palmetto to consider coverage for repeat NGS testing in the case of recurrent, relapsed, treatment-refractory or metastatic cancer and suggested that Palmetto require covered assays to include the minimum genes and genomic locations required for the identification of clinically relevant FDA-approved therapies, instead of all FDA-approved therapies, as it is currently written. Additionally, the comments asked Palmetto to clarify some aspects of the Technical Assessment (TA) checklist and encouraged Palmetto to broaden the associated ICD-10 codes to include all the diagnosis codes that distinguish relapsed, refractory and/or recurrent cancers in solid tumors.

MolDX Now Requires Technical Assessments to be Submitted for All New and Currently Covered Tests by October 1, 2019 to Maintain Coverage

This spring, the MolDX Program announced that all tests that fall under the scope of the two Next-Generation Sequencing dLCDs detailed above (DL38047 for Myeloid Malignancies and DL38045 for Solid Tumors), along with the accompanying Local Coverage Article (A54795), must undergo technical assessment (TA) by the MolDX program. The MolDx program is requiring tests that are currently covered as well as those seeking coverage and are within the scope of these dLCDs to submit TA(s) by October 1, 2019 in order to be or remain covered and reimbursed. The AMP Economic Affairs Committee encourages all AMP members within a MolDX jurisdiction to review the TA checklist to determine if your laboratory needs to submit information to MolDX. For more information, please visit MolDx’s website.

How can you help? AMP plans to comment on these policies and encourages AMP members from the First Coast Service Options, Inc. and Novitas Solutions, Inc. Jurisdictions to submit individual comments as well. Comments to First Coast Services Options, Inc. should be submitted to Medical.Policy@fcso.com and Novitas Solutions Inc. to ProposedLCDComments@novitas-solutions.com by August 11, 2019. If you are interested in working with AMP to develop a response, please contact the policy team at policy@amp.org. 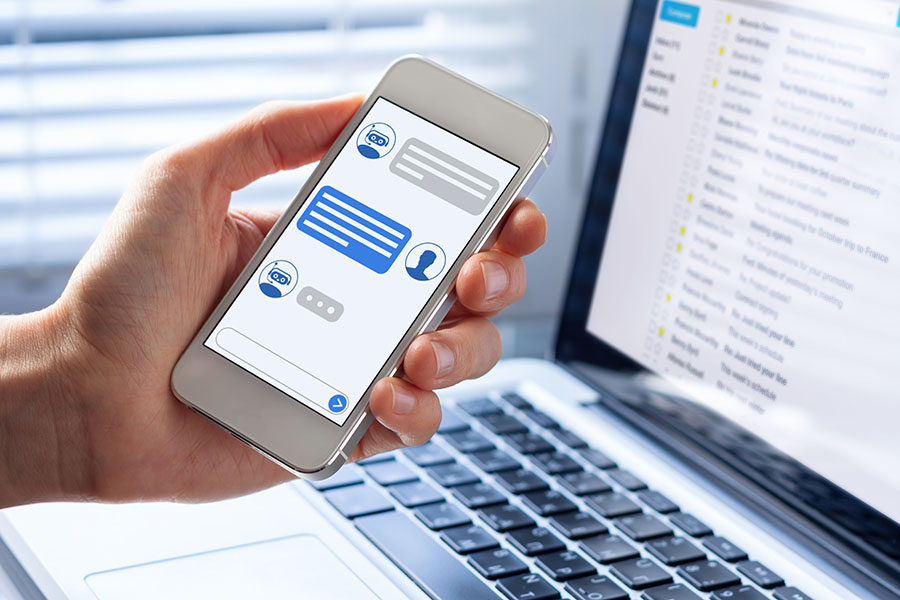 Since the advent of Consumer Genomic Testing (previously referred to as Direct-to-Consumer (DTC) testing), AMP has monitored the development of the field and provided professional guidance. In 2007, AMP released its first position statement, which concluded that healthcare related genetic testing should be available only through appropriately qualified health professionals who order tests from CLIA-certified laboratories. In 2015, AMP’s position was revised to support clinically meaningful DTC genetic testing, as long as certain conditions were met.

In 2018, a taskforce of the Professional Relations Committee determined that the landscape of Consumer Genomic Testing had evolved significantly to warrant a reexamination of AMP’s 2015 position statement. In June, AMP released a newly revised position statement that includes considerations that are pertinent for today’s Consumer Genomic Testing field. The statement includes updates to the aspects that AMP requires for clinically meaningful Consumer Genomics Tests, such as requiring all health-related claims to have well-established clinical validity and encouraging testing providers to recommend that consumers discuss clinically actionable results with their physicians. The statement reaffirms that testing providers must comply with CLIA statue and regulations, and that test validation and interpretation should be performed by board-certified molecular professionals. Additionally, the statement encourages testing providers to adhere to The Future of Privacy Forum’s “Privacy Best Practices for Consumer Genetic Testing Services.” 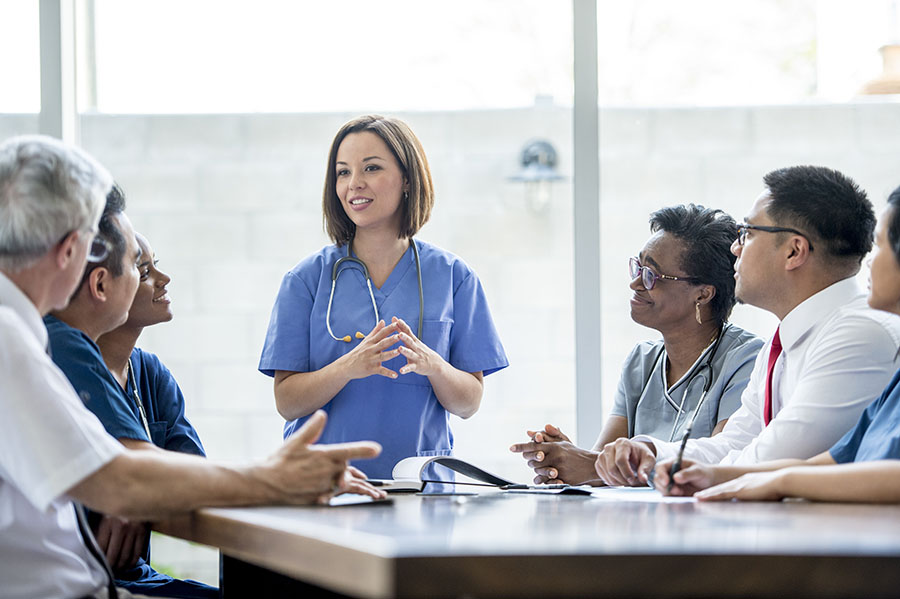 The Economic Affairs Committee is pleased to announce that on September 20th, 2019 AMP will host the inaugural Molecular Pathology Economics Summit in Washington, DC.  As you know, molecular diagnostics is a rapidly evolving field with frequently changing standards for care that challenge the current paradigm for coding, coverage and payment. AMP will bring together representatives from stakeholder organizations across the healthcare spectrum for this interactive one-day summit with the goal to establish shared opportunities to improve the molecular diagnostics economic landscape.  If you are interested in learning more about the Summit, please contact policy@amp.org or visit the event website.

The AMP EAC and PRC work diligently to provide input to Congress and relevant agencies on all issues affecting regulation and reimbursement of molecular procedures. You can review all recent comment letters here.